Here is Good News Sunday, a compilation of some of the most upbeat and inspiring stories published recently by the Daily Herald:

Rows of tall storage racks to hold an abundance of food have been bolted down and gleaming stainless steel prep tables prepared for a surge in volunteers as the Northern Illinois Food Bank enters a new chapter serving Lake and McHenry counties.

The organization’s new north suburban distribution center in Green Oaks Business Park on Route 176, just east of Interstate 94, is much larger and more central than its 20-year-old former home in Park. City.

As a sort of supermarket for food pantries and other entities, the move and expansion has been underway since the fall to meet continued demand for food aid.

The expansion comes as the organization in its service area serves 30% more people on average each month than before the pandemic.

“Our focus and our goal is to make sure we get the pantries and soup kitchens taken care of as quickly as possible,” said Scott Keenan, director of the northern suburban center.

Keenan joined food bank leaders and local officials on Tuesday for a grand opening. Work on converting the 28,000 square foot warehouse-like space began earlier this year. The distribution has not stopped in the meantime, but the improved exploitation is ready to open full time.

DuPage Habitat for Humanity volunteers Scott Cimo, left, and Ryan O’Connor work on a townhouse project in Hanover Park. Since 1995, the agency has helped more than 105 families to obtain their own housing.
– Brian Hill | Personal photographer

When her friends talk about planning a vacation, Iris Bess tells them she’s staying at her West Chicago house.

For the first time in two decades, the 50-year-old has her own home and her two teenage sons have their own bedrooms. She loves the corner lot, her yard and the fact that she can see the sun in the morning from her bedroom window.

She moved into her home in May with the help of DuPage Habitat for Humanity.

“I really appreciate Habitat,” said Bess, who lives on a cul-de-sac that includes other DuPage Habitat for Humanity homes. “This is my vacation spot here.”

Since 1995, DuPage Habitat for Humanity has helped over 105 families obtain their own homes.

It is one of five organizations to receive a $10,000 grant from the Daily Herald’s Neighbors in Need fund. Daily Herald readers raised $36,000 for organizations fighting homelessness, hunger and access to health care. For every dollar raised, the McCormick Foundation donated 50 cents.

By the end of this summer, DuPage Habitat for Humanity will have two more homes ready for families in Hanover Park. 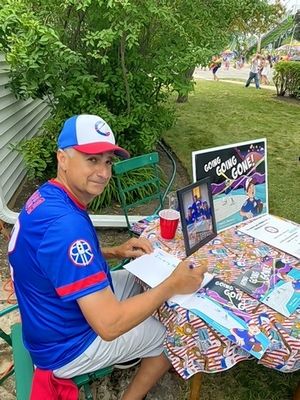 Author and Arlington Heights batting coach Paul Petricca signs copies of his new children’s book “Going Going Gone!” after the 4th of July parade near his house near the recreation park.
– Courtesy of Paul Petricca

Many of those lessons took place at the Recreation Park across from his home in Arlington Heights, where his daughter Elaine and sons Ricky and Sam played.

These experiences inspired Petricca’s new book, “Going Going Gone!” – which is as much a children’s story as it is a typing manual.

The 36-page book, published in June by Archway Publishing, also includes illustrator Dan Vick’s depictions of Arlington Heights locations, such as Lloyd Meyer Field at Recreation Park and Grandt’s Shell Rocket (a landmark long-time local until the service station closes at the end of 2020).

In the story, young players Elaine and Ricky are practicing batting at the Recreation Park when they are swept away by a strange wind to another world. They land in a baseball stadium and are approached by a friendly alien, Sam, who wants to learn how to throw a ball into space.

The kids teach the green ball player the basics of the swing until he hits one that “go, go, go!”